Categories:
Archives:
Meta:
January 2023
02/27/11
Been There Since “Dial-up” Days
Filed under: general, bike tech, people, interwebbishness
Posted by: The Cyclofiend @ 9:10 am

“This is the last email to the internet-bob@bikelist.org mailing list. The list has moved to internet-bob@googlegroups.com.To continue recieving list emails you will need to join the new group. You can do that by going to one of these two links:http://yojimg.net/bike/ibob/join.phpORhttp://groups.google.com/group/internet-bobIt’s been a good decade of hosting this list, and I’ve been very happy to be the list admin and host during that time. For
the next couple of weeks sending email to the old list will get you an
automatic reply with instructions on joining the new list. After that it
will cease to operate.thanks,Alex Wetmore“

Big thanks to Alex for wrangling this roadshow for so long, doing it so well and handling a myriad of interesting and often highly opinionated characters so adroitly.  And thanks to ride-buddy JimG for stepping up to manage the list now.

Guess I’ll have to update this page-
http://cyclofiend.com/ibob/

This filtered in off the mojo wire in the past week, and there’s still time to do something.  Unlike the insta-groups on Facebook, you can actually follow up your quest to create a million people by donating to the cause.

The goal of this group - People for Bikes - is pretty simple:

“The goal of peopleforbikes.org is to gather a million names of support,
to speak with one powerful voiceâto let policy makers, the media and the
public know that bicycling is important and should be promoted.”

Check it out.  Add your name to the pledge.  As of this morning, it looked like they were in the low 20K range, so there’s a fair amount of ground to cover.  But, sign the pledge and share it with like-minded folks.

Somewhere in the redefinition of google id’s back in ‘07, a blogger
slot appeared in my cyclofiend at gmail profile. Since I’d already been posting here for a while, it had more
or less been sitting as a placeholder since then, quietly pointing readers to this blog and the Cyclofiend.com Gallery pages.  It finally dawned on me that I might have a use for it.

My plan starting in April of MMX  is to use this to feature new additions to the Cyclofiend.com Galleries. I’m not
quite sure how that will manifest; maybe picking a new entry from the
batches as they get uploaded, maybe highlighting an earlier entry which catches my attention
again.

I’d been posting updates over on my twitter feed, but that requires folks follow that, and putting photos in a post is problematic. Yeah, you can link to a photo, but what I really want to do is show a photo and have that link to the Gallery entry.

It also lets me get around some of the issues with this blogging setup I’m using here. While it was pretty danged good in ‘05 when I started doing this, my hosting company hasn’t adapted or updated it.  There’s another version for blogging software they are now making available, which may mean an entirely different stream.  Haven’t pursued it enough yet to know the trade offs and potential issues.

Right now, this blog is not robust enough to support even the slightest add-ins or modifications. It won’t work with google analytics (can’t get under the hood far enough to post the code), won’t let me feed in an RSS from twitter, doesn’t seem to play with any kind of monetization setup.  That sort of thing.

By using the Cyclofiend.blogspot.com venue, I can separate things out a bit.  This venue has always been musings to the side of the Gallery, and now I can focus the other one on what is happening within the Galleries.

Because it’s a blogger-based setup, it’s pretty easy and familiar if you want to tap an RSS feed from it, follow it via Facebook or what have you. I’m sure it will continue to be refined as things move along, but for now, there it is.

Was trying to track down a photo from a couple years ago, and the google machine gave me a link to an old blog post I’d made. I absent-mindedly clicked on it and  - poof - I’m realizing that I’m looking directly at my cyclofiend.com blog.  This is really only of note to me, as I seem to be the only one who can’t actually access the danged thing (tech details here).

But, since home-access seems to be working for the first time in several weeks.  I thought I’d just honor the un-glitch by making a quick post.  Now, I need to decide if it is worth actually posting the snippets and notes from the past week or so.

I guess the only one which comes to mind is from last weekend.  Rain ride. Fenders on the Quickbeam. Rainlegs and jacket.  As I’m starting to working my way north again, at the base of the Camino Alto hill, a vehicle edged up next to me and slowed to match my speed.  Driver started hollering something.

Then it sort of registered what he was calling out -
“I love that bike!  That’s my favorite bicycle!”

I smiled, thanked him, we chatted a bit and then I waved back and he motored onward.  Made for a damned fine ride home.

There have been a few things going on the past couple weeks, and as I mentioned in this post, I’ve been working on a longish-and-ever-lengthening post on cranks. (Well, cranks, bottom brackets and interface woes. You have been warned…)  However, there’s been a bit of an issue in getting these things posted. It’s turned out to be odd enough that I’ve got to share it.  Sorry for the clipped prose, but I’m having to do this at work, between phone calls and dealing with reports.

Last time I tried to log onto my blog at home, the page kept timing out, rendering the notice that the server was taking too long to respond. Same for the blog itself. Ok. Tippity-tap and I start a trouble ticket with my friends at hostway.com.  They get back to me within an hour, saying they can’t see anything wrong, and it renders, pings and traceroutes just fine for them. I try the same and it doesn’t, doesn’t and won’t.  Hmmm….  I share this back to them and they quickly make some suggestions, and using a non-cached web relay, get the thing to work.

This all points back to my ISP at home, who I contact via their real-time chat.  The funniest moment was when the first person said that they couldn’t see the page either.  I took this to mean that it was doing the same thing, giving me hope (well, terror, actually…) that it was an ISP issue. So, I asked for specifics of traceroutes, what error messages she was seeing, etc. Instead, she finally admitted that she couldn’t actually check the website, as she was prevented from doing so at her job. That would be “surfing”…. Uh. OK.

Got kicked up the chain 5 times (this was the day before Thanksgiving, so I really didn’t think there would be anyone actually working who might be able to diagnose the problem.)  The last two people pointed me to a form on their company site which would request that a site be unblocked.  At this point, it had taken too long and I needed to move onto other things. I thanked them and moved on. Did the unblocking thing.

Got an auto-responder email by the Thanksgiving morning, explaining that that IP address was not blocked and that email should be getting to me if sent from them.

OK, what we have here, is a failure to communicate…

But, the pointer kept swinging back to my end, and something being weird. Finally after chatting via email with JimG, I realized that I had dumbly never tried bypassing my router.  Did that and  - BAM - spicy internet log in web page…

Rerigged the stuff and then dug into the router - a Netgear wired 614v4 model.  Reset, reset again, set up and dug through every permutation of menus and pass-throughs and everything I could think of, all for naught.  Finally, sometime later on Thanksgiving night, I found my way to the Netgear help bbs and found out that this was a feature* of this series.  In other words, for no apparent reason, my router will not allow this one website to communicate with my computer. Of course, this worked fine a week or two ago.  Seems they get senile and/or decide they just don’t wanna play any more.

Suggested fixes seemed to involve a router from a different company. Which I just wasn’t going to do on the Friday after Thanksgiving.  So, it’s still languishing and I’m not posting regularly.

*First Rule of Computer Manuals - A bug can be defined as a feature by documenting it.

But, if I was posting, one of my thoughts during a recent ride to work was as follows:


California has one helluva budget problem right now. Based on my informal, entirely non-scientific, visual survey on the way to work today, I think they could go a long way toward fixing that if they enforced the “hands-free” wireless telephone use regulation.

A coworker got popped for this infraction earlier in the year, and it cost him more than $200, with added penalties.  I think I could have raised about $1800 on the way to work today, without even trying….

Oh, heck.  I’ve been writing a short blog post about cranks which seems to be expanding like the blob.  Since it’s still not done, here’s something someone else did that made me spit coffee on my screen - 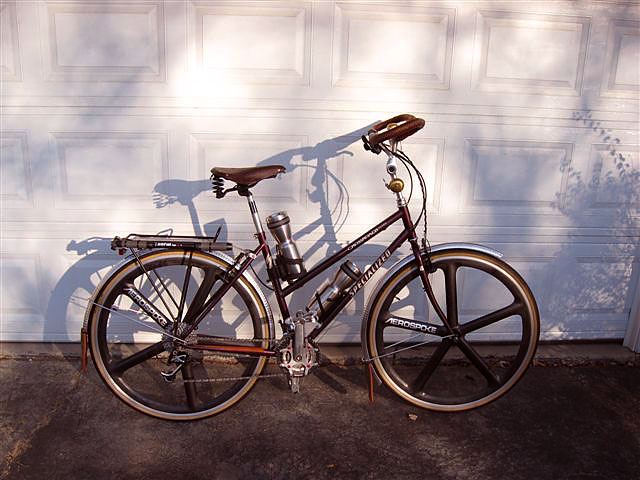 It seems to have become enamored with Current Classic #426, Joe Z.’s Specialized (which has actually been updated, twice).  And, since it’s the last Friday of the month…which sort of makes it the Critical Mass of BSNYC Friday Fun Quizzes. Nice.

Thanks for the nod, BSNYC! 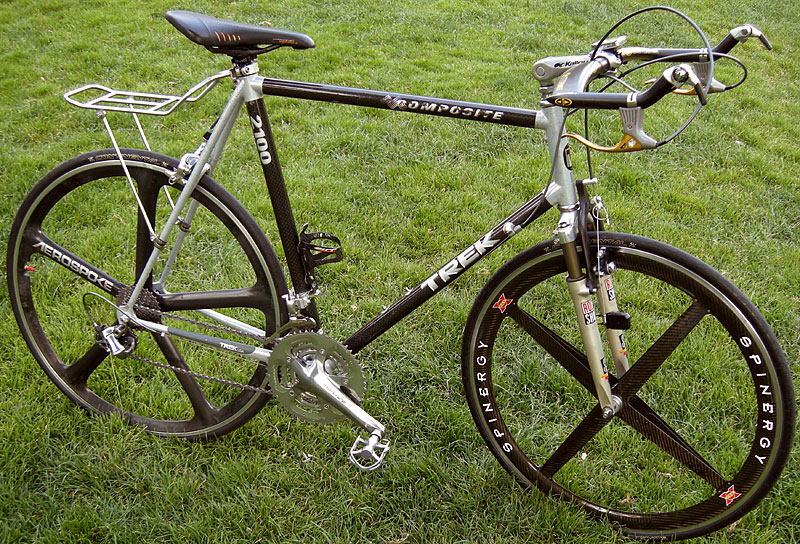