Combine the demands of work and the fever-pitch of the holiday season
and you obtain evaporating days. Left work late, but last night’s
commute home presented one of those rare-but-wonderful moments of
cycling nirvana - the uphill car pass.

Rolling homeward, the intersection traffic had increased to
near-gridlock, and auto drivers were jutting forward in 6 to 8 inch
increments with that “dammit! I am not letting THEM in!” attitude of
the chronically delayed. ‘Tis the season.  I could see that the
freeway was worse off, probably the result of an accident or stall.
That generally puts the hoi-polloi into “Exit & Surface Street”
mode, hence the extra traffic and ebbing forward momentum.

Of course, a bicycle commuter remains immune to this.

In the final miles of my commute, the road begins to incline. Although
a few cars and trucks revved past me on the flattish approach, I could
already see the brakelights before me. As I slid slightly back on the
Brooks saddle to torque the fixed gear, I began to pass them.

With 15 watts of NiteRider HID and a pulsing Cateye LED as my shield, I
continued upward.  Cars skimmed by as though they had stopped,
which in fact, they had. The next mile or so went by in a breeze,
buzzing past the idlers. They would move occasionally, but never with
enough speed to match mine.

It was, in short, a marvelous moral victory.

Been rolling around town on this thing for the past week, so it’s high time I admitted to it in a formal setting…

Over the last week, the bits have been getting installed, and a bicycle has begun forming out of the parts. 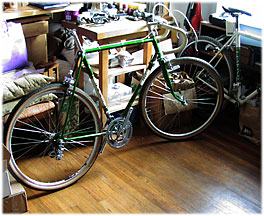 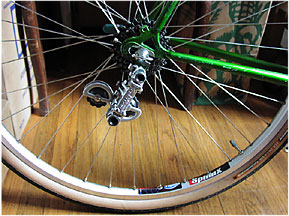 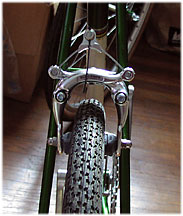 Hardware in place, but no shifter cables rigged. The sharp-eyed will
note that there is a heckuvalotta clearance for the tire at the
brakes.  Good for fitting fenders, to be sure. 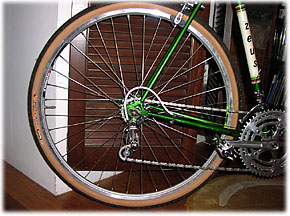 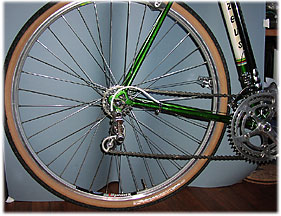 When I rigged up the rear derailleur cable, I realized that I’d
never really messed with anything of this particular vintage.  Beginning
with a loop that seemed appropriate for modern rear derailleurs, I
compared it to some photos of similar setups.  It definitely
looked longer.  A quick post to the iBob list later, Matthew of
Kogswell recommended hacking about 50mm off of the loop.  The
result is shown in the second photo. It also worked flawlessly on the
ritual no-lights after dark winter neighborhood test ride which seems
to accompany these projects.

So, by last Saturday morning, everything important had been connected,
and the Zeus got wheeled into the crisp sunlight. (And in my haste to
snap some photos, I managed to forget everything ever learned about
backgrounds, composition, etc…) 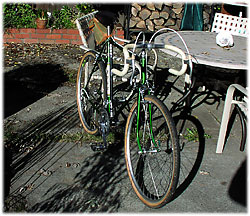 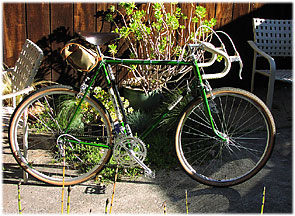 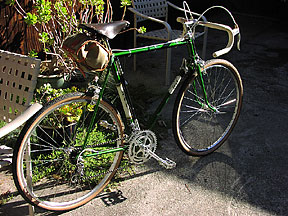 Darned if it didn’t work…
As I set out on the roadway, the bike disappeared underneath me.
Luckily ample padding allowed me to bounce rather than skid.  It
reappeared and I began riding again.  I found that with
concentration, I could prevent the bicycle from disappearing underneath
me. After a few miles, this became second nature, allowing me to
concentrate upon other aspects of the handling.

Vertical compliance was extraordinary, yet lateral stability remained
quite high. I found that this system could also be “locked out” by
flexing my quadriceps muscle. Locking out did complicate the actual
pedaling motion, so I allowed my knees to use their full travel range.

Two non-flippant observations did occur -
1) this bicycle is a serious low-rider.
2) cornering is frighteningly stable.

Bear in mind that I’d never ridden the Zeus as a 700C (or 27″, but I’m
reasonably sure it was a 700C), so there won’t be any rational
discussion of what this conversion has done to the ride.  But,
after rolling around for 30 miles or so,  I had encountered a few
downhill turns.  The bike cornered solidly - to use the railroad
euphamism - like it was on rails.  It felt like it could have
easily handled tighter turns or more centrifugal force.  Pneumatic
trail as outlined in VBQ? Combined with a loooooowwwww bottom bracket?

The BB height resulting from this conversion has ended up to be 26 cm.
I’ve only scraped one pedal (slow speed, inverted, tight turn), but I
can very easily toe the ground while in the saddle.  I’ll post
more complete dimension specs.

The final observation (gotta get to work) was that the gearing has got to be the daffiest ever encountered.

A quick visit to Sheldon’s Gear Calculator will give something like this:

I had tried to find another freewheel with a bit more range (and
suffice to say, obtaining smaller Zeus chainrings is a bit, um,
challenging…), but found that the only ones with wider range had the
wrong threads.  The freewheel is an Atom, and I suspect it may be
French threaded.  More as time allows.