Not the most impressive of months. Out-o-town trips and class/family committed weekends kept anything like a long ride from happening.  Still, managed to keep the commutes sharp and snuck in a few cheap miles here and there. Not feeling too spunky after a steady week of riding (yeah…the day after I wrote about how good I felt - shoulda been a clue right there…) and have event tomorrow for which I need to be on top of my game, so coasted all last week to ensure prime condition.

All Quickbeam-fixed miles, except for one loop on the MB1.

6 Yoga Sessions (and it’s continuing to help).  No running. Ok, I get it.  There’s no money in the state these days. But, closing 200 or so of the California State Parks?  Really?  That’s the best you could come up with?  How about suspending the pay of the state legistlature?

oooooh this gets me grumpy!

From the California State Parks Foundation website -
“Just this week, the Governor announced a new proposal to eliminate
state funding for our state park system â which will close more than
80% of the 279-unit state park system.  His proposal to cut $143
million from our state parks is 10 times worse than last year’s
proposal. CSPF is kicking off the Save Our State Parks campaign again,
and we need your help to take action TODAY and tell the Governor and
your state legislators that gutting funding to state parks is
unacceptable.

Next Tuesday, June 2, the Legislature’s Budget
Conference Committee will consider this proposal.  State park advocates
need to make their voices heard RIGHT NOW.  Your contact to your
legislators is critical.

Last year CSPF members sent over 55,000 citizen
petitions to Sacramento and stopped him from closing 48 parks. We can
make a difference…again.”

Whatever else single speed cycling is, it often shows only your weaknesses. You spin like a madman to cover the flat distances and can’t quite maintain a cadence.  You go anaerobic on steep inclines and walk.

But single speed cycling also gives back. Its praise honest. No distractions of gearing options and false optimism.

There are trails which don’t change. Or at least, they ascend at an angle which won’t change appreciably within my lifetime.  A few months ago, the main climb of my local trail had me wondering about age, flagging strength and whether it might be time to change some gearing. I could do the work, but needed to loop out and pause to regain my breath, stop on the bridge to take a moment of recovery.   Rode the whole thing out of the saddle at sort of an ugly, diesel-esque cadence, momentum hard to come by.

But last night, I nipped out as the sun set and ran the trails. Miles have been a bit hard to come by this month, so I wasn’t sure how it would go.  But, I stayed seated and found power, raised out of the saddle and had the odd feeling of accelleration. In short, it felt fast, clean, good.

And therein lies the beauty of the single gear. Same gearing. Same trails. Some honest and direct feedback. That tenuous feeling of grace.  One of the reasons we ride.

Haven’t been taking too many photos on recent rides. Focus has been necessarily elsewhere of late, which means that I’ve had to sneak in miles a bit here and there.  I think I got my battery sets mixed up, so when I did pull the pencam out, it made a warbling beep and frizzled out.

But on the way in this  morning, there was a grand alignment of light, image and power sources, so when the feeling of efficiency and smoothness hit this morning, I remembered to take a few shots. Nothing special.  I mean nothing really in the Big Picture sense.  Just a nice bit of road and smooth pedal stroke to start the day.

May has eased out of the gate with a bit of a saunter.  Had classes over last weekend and still felt like I was fighting something, so I played the Costanza card and did the opposite of what I wanted to do - not ride. Wendesday was the first ride of the month - just a regular commute, with a nice little added loop option both directions as I was out the door early on both ends of the day. The Bay Area weather is still a bit nutty/goofy - gusty winds from odd directions, rain with the sun out, instant appearance of dark clouds. But, riding is an outdoor sport, and it felt good to stretch the legs. What was interesting is that after only six yoga classes, things feel different on the bike. There were two or three places I noticed it. First, I was aware of the placement of my shoulder blades. One of the yoga instructors had mentioned the image of  “tucking your shoulder blades into your back pockets”  as a way to relax the shoulders and open the chest.  This felt huge, and seems to be undoing a rolling forward of blades and shoulders. Though I don’t think I had gotten to the classic painful pose of  shoulders up around my ears, it got things much more relaxed.  This led to item number two: a sense of strength while in the drops of the handlebars, and easier breathing.

The third thing was slightly fleeting but definite.  A while ago, I had fallen pretty hard on my left hip while out on the trails, resulting in a nasty hemotoma.  After a couple years, the swelling has gone away and there are no dead spots in feeling.  In yoga class, what was interesting is that my right hip was the one which seems noticeably tighter and less flexible.  Must’ve overcompensated to that side when things were bad, plus it’s my dominant side.  Anyway.

While riding home, I felt power down through my hips in a way that I hadn’t for since the tumble. It’s a bit difficult to explain, but it seems like the angle of the hips are slightly more open, which positions them just a bit differently on the saddle. When I apply power, it seems to come from the hip more than the leg - well, more precisely, I notice that it’s incoroporating the hips to the downstroke. Feels much more powerful and efficient.  It didn’t always quite go that way, but as soon as I felt it, it reminded me of how it had been.  Again, I’ll blame the yoga.

It made me realize how easy it is to have things slowly slide out of whack.  Shoulders rolling forward.  Hips pitching back. That whole mindfulness thing is really good.  I’ll have to look into maintaining it.

Bit off a small chunk of the backlog last evening, and the Current Classics Gallery now has a few new entries. They start at 639 with a beautifully photographed Rawland Olaf, courtesy of Joe S. (who also landed an image in last year’s Cyclofiend.com calendar) - 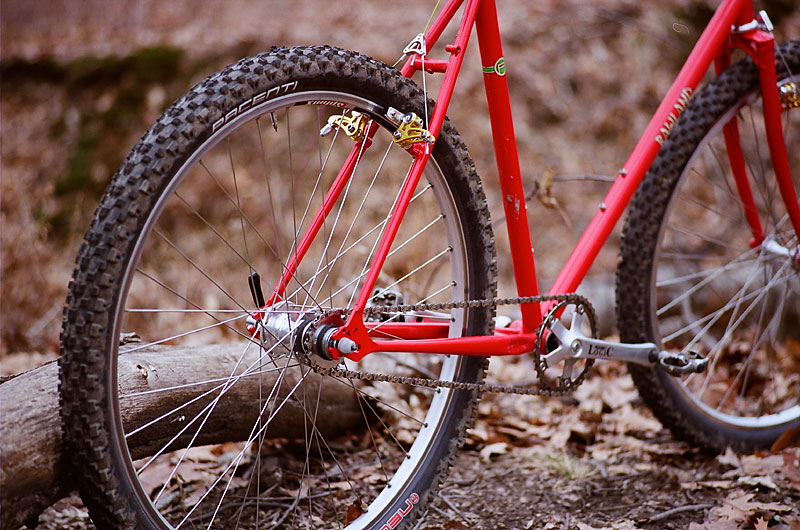 Me… I’m riding in today for the first time in May.  Seemed to have shaken whatever minor grunge had nicked me last week. Woke up seriously sore from last night’s  yoga class.  “Worked” sore - not damaged sore.  Been bending and stretching in very non-cycling directions, which is a good thing.  Have found that after pretty seriously bouncing off my left hip a couple years ago, I must’ve over corrected, and now find that there are some oddly tight and immobile aspects in my right hip.

Which is, I reckon, one of the reasons I’m doing this.