Click off the alarm and see if the dog settles. It’s been tough to
watch her in pain this week, movements slowed by something she can’t
tell us about but clearly impacts her. She lies down, nose toward the
screen door so she can catch a scent of the dawn and eases her head
back down.  I can catch an extra 15 minutes or so of sleep.

Reasonably tired from yesterday’s ride still, even after passing out on
the couch for a couple hours. But it was a frustrating week, and maybe
it was just catching up with me. The dog stretches and gets up, ready
to eat.  I do the same, but want to ride. We come to an agreement,
she gets food and I go out to get a bike.

As I’ve said before, each additional bicycle you own increases
exponentially the possibility that none will be working. I’m lucky
right now, but entropy creeps into the system. The pervasive theme
right now is dirtiness.  Bikes ridden hard and put away dusty.
Some have clean sectors where a bottom bracket job or some brake work
hand rubbed the finish clean. The funny bikes sit waiting for the
commute - the 650Zeus is probably ok, but the fixed still needs a wash
and check, which reminds me that the QB really should get the grime
cleaned away.  From the rack, I remove the mtb which has nearly
cooked brake pads.  It did great up in Ashland last week, but
needs a thorough strip and clean as well. Crikey, I still haven’t
written anything about Ashland or the Summer Solstice Ride.  This
week, along with the other stuff… don’t even want to think about that
yet.

The cross bike is dusty but reasonably ready.  Perfect for the
day’s ride, as I feel like I need some gears. Rattle bounce check -
OK.  Cranks tight - check.  Still aligned right -
Goody!  Out and on the road to the trails, listening to the light
humm of Michelin Muds on the pavement.  A bit late to the trails,
but there aren’t too many folks who drove their bikes there.

Road turns to trail.  Trails are officially dry now, still a few
weeks away from the dusty, dusty, dusty of August. I tap the front
brake and it squawks wildly again, despite have been fine last night
when I readjusted it. I pull into the tent camp area and pull out the
hex set. As I reposition the pad, the leader of a group ride is busily
telling the folks he’s leading NEVER to use the front brake.  The
bike will flip.  You’ll land on your head.  He only uses the
front brake when he’s ready to jump off.  I don’t think they can
hear me grinding my teeth, but I do not offer an alternative view, even
though I don’t agree with his statements.

Back on the trails. Climbing. Runners caught.  Riders
caught.  It’s warming up now and I’m wearing black wool.  I
hear something behind me and a tall runner appears, then sprints past
as I give him room. Nice to know where you fit in the food chain. 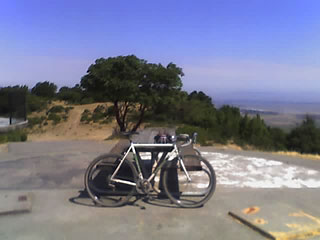 Sit
on the table at the Nike site for a bit, enjoying the sun on my head
and a Lemon Clif Bar. Others arrive and leave.  I head down the
fireroad, then take the singletrack out to the point. I’m tentative for
a while, then overgripping and blocky for a while. Somewhere on the
trail, the flow begins, and I’m riding lighter than before.  It
always appears as a mythic place, but the rocks and bumps don’t punish
quite so much, and the lines get better. The cross bike forces you to
ride that way. When you are doing it right, it doesn’t feel fast or
slow, just tuned to the trail.

Rolling through the final twists of dirt, I kick out near the park
entrance. The rare homeward tailwind appears and I get pushed home in a
big gear. A day started well.

Not much to say tonight, other than go check out “Campy Only’s” Big Fix Blog.  Buncha crazy folks on Fixed Gear bicycles riding across country to raise money to fight Histiocytosis. 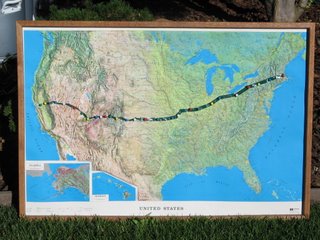