Whether or not you spent July glued to the Tube watching this year’s Tour de France, here’s a way to get that uber-roadie taste out of your mouth…

Spend a few days at a pretty incredible spot on Mt Tamalpais, hosted by the queen of Mountain Biking herself, Alice B. Toeclips (aka Jacquie Phelan)  -  (click on the flyer to download a full-sized, ready for framing version…) 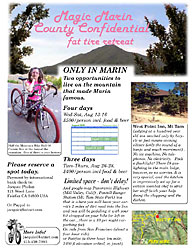 This flyer crossed my desk, and I thought it would be criminal not to mention it here - The West Point Inn is located about 2/3rds of the way up Railroad Grade, and one of the true landmarks on the mountain. Most folks don’t know that they allow limited stays for folks  - It looks like Jacquie scored two prime sets of dates on either side of the Single Speed World Championships (up in Napa this year).

I’ve mentioned this before, but it bears repeating:

“As the number of owned bicycles increases, the chance of none of them working properly increases geometrically.”
This axiom can serve as a reminder of our sloth, as well as our innate tendancy to be drawn towards shiny, new objects. If there’s a mysterious creak or a slightly dry chain, it’s much easier to lift a different bike out of the rack and roll away upon it. Of course, the ravens eventually return to roost, and you end up either the best friend of your local bicycle dealer, steered constantly to the “New In Stock!” section of the displays each time you wander through the vestibule, or  you end up with  bikes that  are never quite right.

I try to hit a balance of appropriate tech work, so the machines run well.  But, I don’t really have the time or inclination to obsess - neither rail dust nor road grit bother me particularly, so as long as the drivetrain is reasonably quiet and the brakes don’t yelp, that’s good enough for me.

Where I get caught is Big Tasks. As an example, back in December the non-drive crankarm on my Dawes broke during a commute. (“Dang, That Ain’t Right…”) Took some photos back then and figured I’d get to it. Instead, I started sharing ride-to-work duties between the Zeus and the Hilsen (mostly the latter).  As I was planning on riding the Hilsen in the SF Randonneurs 200K in January, I wanted to make sure the fit and setup were good. Occasionally, I’d contemplate the gnarled end of the broken bits, and consider how to get it rolling.  But, the tech work stayed entirely theoretical. (Yeah, this has been a busier than normal winter/spring/summer, but so far, Life keeps moving on and There’s Always Something.)  I was mostly riding the Hilsen to work, with a little Zeus thrown in from time to time.  Offroad, the knibblies of the Quickbeam were the go-to ride, as the Stump (most of the people I ride with don’t even know I have this…) was still suffering from rear wheel issues (I need to repack the hub and replace some spokes/nipples), and the MB-1speed has developed a high-torque slip/pop every once in a while which can only mean that I’ve cooked another freehub.

The slow speed rear-wheel gank on the Hilsen a few weeks ago pretty much was the catalyst. The rim had reformed to an unrecoverable Pringle-shape, so after I had the laughable interlude of digging through a pile of rear wheels and realizing that every one of them had a 130mm or smaller OLN measurement, I got a new one from the fine folks at RBW (Asym Velocity Synergy).  It showed up a day or so later, and I do plan on cheat-building that wheel this weekend.  In the meantime, however, Gino was in town and JimG and I were planning on riding with him. That meant that the Quickbeam morphed into its road version and I was staring at more broken than working bikes.

The embarassing thing is that I didn’t need to buy any parts to get the Dawes rolling - everything was in the pile. That clearly means that the only thing between me and a working bicycle had been my sloth.

As I’ve mentioned before - this one is not mine, but he’s more photogenic.

The steps went pretty simply - the only ponder-it-first bit was figuring how to get leverage against the mini-me crank nubbin so I could remove the pedal. Lacking a bench vise, it became one of the few things for which the standard vise-grip was invented. Luckily, I’m semi-obsessed about greasing threads, so the pedal loosened quite easily once I created the clamp-on leverage. The task got lengthened somewhat by the need to chip off the accumulation of winter commute grunge hardened by 7 months of significantly lower humidity.  But, before you knew it, bob’s your uncle: After I got things tightened down and test rode it a bit, I took another look at the crankarm.  It actually press-fit back together rather decisively.  The interesting thing was that there had clearly been a last-minute bend before the failure occurred. It does sort of make one contemplate using steel cranks.  But, the selection of those is somewhat limited, to say the least.

I ended up using the old Shimano 600 cranks which came off of my open-wheeled racer a number of years ago. I had thought they had a slight wobble in the spider, but it’s not showing up demonstrably in this new setup. The 42T Campy chainring didn’t fit, of course, so I used the 39T Shimano ring mounted on the inside of the spider, and then swapped out the 16T cog for a 15T that I had. The 39 x 15 is maybe a gear inch and a smidgen lower than the 42 x 16. The only possible benefit of such mechanical torpitude is that it’s kinda like getting a new bike. In the 7 months or so between failure and ressurection, I’d pretty much forgotten what a nice ride that bike has - just about the best garage sale find I’ve been lucky to nab. Who knows, maybe I’ll get fired up this weekend and get the other bikes on the road…

Spinning vs. fixed gear grinding from Gino on Vimeo.

Cruising through the flats of Nicasio Valley from Gino on Vimeo.

My abject failure at documenting the event.

Good to be out