I’ve been using a Rivendell Hobo Bag for over a year on my fixed-gear
Dawes commuter
. Normally, I let things go a bit during the winter,
figuring that once the skies dry up in Northern California, it’s a good
time to go through the bike with a complete cleaning.  Since the
bulk of the rains normally cease in February or so, things don’t
normally progress too far toward entropy and decay.

A
few weeks ago, I noticed that the morning light showed that the Hobo
Bag had sunk a bit.  I’ve had this half-idea for a stabilizer bar
made from a bent rod, but didn’t ever execute it, so there’s nothing
really holding it up other than the two top straps and a couple of
ever-slipping cords tied around the brake hoods.  The Hobo spent a
few months gettting pretty wet at times, carrying jackets, light system
batteries (no generator hub yet…maybe that’s the project for next
winter) and other heavier stuff. I pulled everything out of the bag to
reset the cords, and noticed something funny about the bottom - there
was a circle that didn’t seem to match the rest. 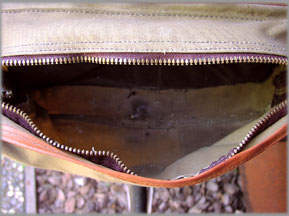 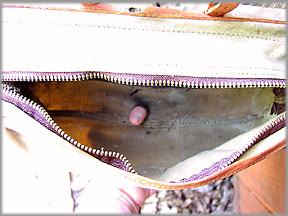 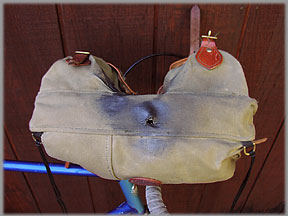 A hole.  How the heck did that happen? 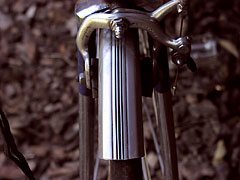 It looks like the nut from the front brake had been poking into the fabric as I rode.

So, I wandered down to the local shoe repair spot - which has pretty
much been in the same place since the mid-1900’s.  Chatted with
the fellow who re-riveted my old Brooks a couple years ago and
discussed options with him.  As I talked about patching  it,
I showed him the Nitto front rack for the Quickbeam, and asked him to
put another piece of leather on the back of the Hobo so it could be
mounted onto the rack. 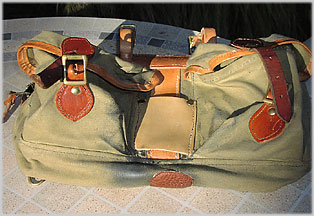 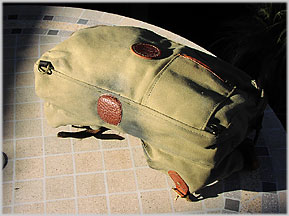 This is the way it came out - not quite what I had in mind on the patch
- I’d really wanted a square piece that went the length of the
bottom  - but pretty much the right execution on the slip-on
attachment. 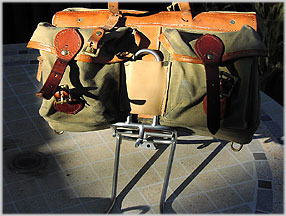 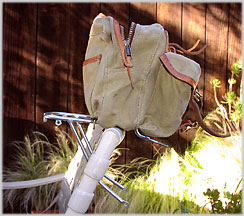 I’m not sure if I’ll use it on the Quickbeam, especially since I
haven’t actually mounted the rack.  But, since they had to punch a
few holes for the patch, a few more on the backside weren’t going to
make that much difference.

While this was going on, one of my eBay searches popped up this thing: 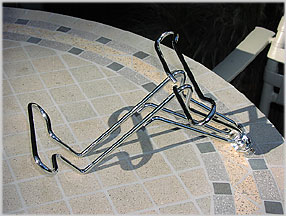 The price was right, and it showed up a couple days later. 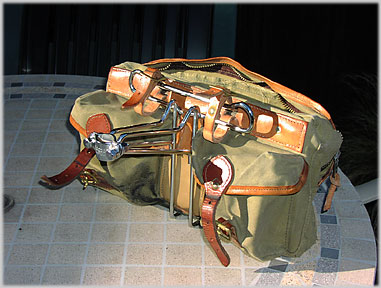 An interesting thing, but unfortunately a bit heavy.  You really
appreciate the way Nitto builds a rack when you heft the thing.
Still, it puts the bag in what looks like a swing-free position.

Also showing up this past week were my long-lost Ritchey Cross
Cranks.  The original problem (documented somewhere in a previous post)
had
been that the cranks were slipping on the bottom bracket, despite being
properly installed. They’ve been pretty helpful in getting them
replaced, but it had happened a couple times now - the last time I even
put in a brand new bottom bracket just to eliminate that
variable.  Despite assurances, it slipped again.  This time,
when I
opened the box, things were rather different (of course, it would help
if you had seen the 3 other boxes from previous shipments, which were
red…): 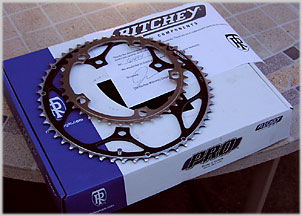 They’d sent a set of Pro Road Cranks, and even sent along the road
chainrings (53/39) in addition to the Cross set (48/38).
Definitely a different forging than the Cross Cranks that had not fared so well. 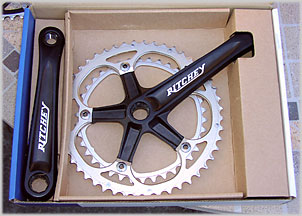 Hopefully, the third set will be the charm.  They’ve got to - they say “Pro”… 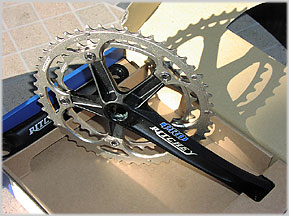