The stock Quickbeam had a problem. It let me coast.  In order to
fix that minor oversight, I dug through the parts bin and found a 14T
sprocket which had been sitting around unused from my first fixed gear
project. With the 40T chainring, that calculatored out to be around 77 inches - pretty close to the 42×15T I’d been running on the fixed.
The coastable side of the drivetrain had proven to be great for trail
rambling, but this way I could cover the distance between trailheads a
bit more efficiently.

It worries me how much I enjoy threading on a fixed gear cog. There’s
something so simple about the mechanism.  There’s just something
so “wrong” seeming about putting a solid toothed sprocket directly onto
a wheel — like it could do some damage.  (And yes, I’ve seen
those photos - it can do some damage…)  It makes me think about
Neal Stephenson’s description of the “Hole-Hawg” as a euphamism for
Unix in “In the Beginning, There Was the Command Line…”  Simple
tools tend to have the most power.

I daubed a touch of grease (rather than loc-tite) onto the threades,
and cinched it on pretty tightly with a chain whip.  Then I
followed that up with a lockring from a bottom bracket. Even through it
doesn’t thread against the sprocket the way a true fixed hub allows, my
hope is that it will restrict enough rearward movement in case I get
all trackie and forget that the Quickbeam is rigged with actual brakes.

It worked wonderfully.  My fit is much more comfortable on the Quickbeam than it had been on the Panasonic fixed gear,
and that let me ramble a decent loop around the paved roadways.  I
could probably blather on, but suffice to say that it felt better than
it should have for someone who has been putting in too few miles for
the past 5 or 6 weeks. I had to scurry home towards the end to beat the
rains, and managed to tuck the bike back in before they fell in earnest.

Other oddball notes:
The only lube I had handy was a bottle of Pedro’s Road Rage - I had
forgotten what nasty stuff that actually is.  It may work OK in
terms of lubing up a chain, but the messiness is needlessly immediate
and pervasive.  If I hadn’t gotten it for free, I’d never use the
stuff.  And if I could figure out a rational way to get rid of
it…. Maybe it’ll make its way into the donations box.

Only little thing I’ve noticed is that the rear wheel doesn’t quite
want to stay put - it’s not dangerous or anything, but it tends to
creep forward a little bit.  Probably has a lot to do with the
super smooth paint job and the less than aggressive serrations on the
face of the quick realease.  Now that it’s chomped into the paint
a bit, maybe that will lessen.  I’m also going to see if I can
come up with a nice un-logo-ed Salsa QR set in silver. A guy’s gotta
have a dream…

There’s a condition which I’ve always referred to as “velcro trails”.
It doesn’t ever last too long out here in California, but it makes for
wonderous riding when it exists.

One of the byproducts of little rain in the summer is that trails get
dry, dusty and loose. The old photos of folks getting sideways on
Repack give you a good sense of trail conditions for much of the
summer.  But, after the winter rains hit (and hit again…), the
trails soggy up and begin to dry out.  At a certain point - given
they don’t get hit by more rainstorms - a nearly perfect track is
created. Sometimes you get these conditions after the first rains of
fall. No matter what you do, you literaly cannot get your tire to
slide.

Now those of you who live in places with “normal” weather patterns can
chuckle at this description, but if you’ve ridden it, you know that it
is pretty great.  Of course, we have mountain lions and
earthquakes out this way…

These were the conditions for the first “real” Quickbeam outing - one
that combined road miles, gear changes, trail riding and a pause to
enjoy a ridiculously warm early February day.  We’ve had some
fierce storms roll through, dumping copious amounts of rain on our
heads. With a few weeks of grey skies and storms, it’s always a
wonderful shock to see the hills magically regreened.  The trails
were even better.  Something about the beating rains had flattened
everything out, made them so soft that rocks and pebbles literally sunk
into the dirt.  With little exception, they seemed to have been
“rolled” with one of those big metal lawn rollers. That made them
smooth as anything, but left them extremeley grippy.

I figure once summer hits, I’ll probably have to slap on the Michelin
Mud CX tires.  But, for today, the stock Paselas remained in
place.

Rolling away from the house, I took a few diversions through
Eichler-land and crested a small hill to get back over towards the
trails of Mt Tamalpais.  At the top, I paused to let light fall
upon the Quickbeam, pleased with my hill climbing done in the bigger of
my Quickbeam’s gears. 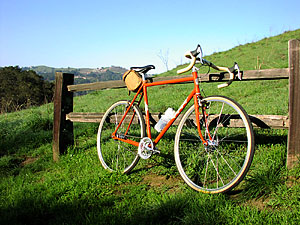 Made my way to Deer Park in Fairfax and found that the trails hadn’t
moved too far from the last time I’d been there. Decided to use the low
gear to climb and slid the rear wheel back in the dropout.  I was
reasonably surprised where it tensioned up, until realizing that the
chain had slipped of the freewheel.  Once repositioned, the rear
hub still sat pretty far rearward, but at least it was entirely within
the borders of the rear fork end.

While I didn’t have time to go for a heroic/epic tour of the mountain,
the Quickbeam climbed so well that I did go higher on the trails than
I’d planned. It seemed like much easier climbing than on my singlespeed
mtb - of course, there was a big jump in gearing up to that bike - but
I was able to climb seated most of the time.  The smooth Paselas
continued to stick well in the trails on the way up.  I dropped
down to Phoenix Lake.  The Quickbeam handled stunningly well. I
kept waiting for it to exhibit some odd behavior - being that it was a
new bicycle - yet it just cornerned well and handled the rolling
descent easily, comfortably and predictably.  After a short rest
lakeside to enjoy the sun, the Quickbeam talked me into backtracking on
the trails rather than dropping down to the roads. It had the right
idea, of course. As the climb back to Fairfax was a bit less steep, I
left it in the big gear.  Climbing in the saddle once again, it
rolled easily upwards.  I managed to scare the beejesus out of
another rider I came upon - singlespeeds remain unmatched for the
silent stealth approach.  (I did apologize - I thought he had
heard me cough…). 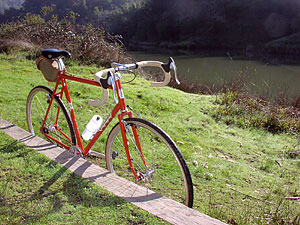 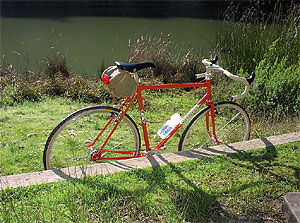 Rolled back on the roadways - took time to accompany an escaped dog
back to their front yard from which they’d escaped - and made it home
with a  huge grin.  The Quickbeam is a wonderful and
comfortable ride.  I’ll be honest; it didn’t feel “light” when I
first picked it up.  But in the few rides I’ve had time to enjoy,
it seems to have more gumption on the trails than my other bikes. I’m
sure it’s schoolboy giddiness with a new bike, but it just seems to
keep accellerating - giving momentum that none of my other bikes seem
to do.

I did have chance to add this bike to the Singlespeed Garage.
I’ve also got some detail images of the quill mount cable guide
solution - described in an earlier post.  Basically, the shim
stock came from a seatpost shim which had the proper dimensions. 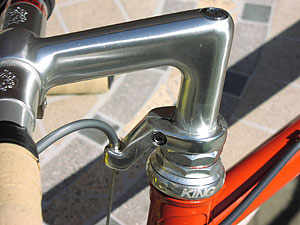 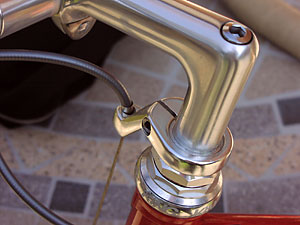 Everybody Knows - The Duhks
Red Light - Wall of Voodoo

iBob
denizen Tarik Saleh has begun putting up daily photos of Chinese bicycles
on his blog.
He’ll continue this until he “grows tired of it.” In the meantime,
enjoy!

Got a gap in the work schedule on Friday, which gave me just enough
time to scoot over to RBW WHQ&L* to pickup the 58cm Quickbeam which I’d ordered waaay back when they got announced.  Mark at RBW
had graciously installed the Chris King headset which had been lying
around here for a year or two.  This caused a bit of tinkering to
get the hanger installed, as I hadn’t noticed that the CK headset had
no room for a hanger, due to its “gripnut” design. But, a quick pass
through A Bicycle Odyssey set me up with a quill mounted hanger. I built it up that evening and watched the rising sun pick out the design details the
next morning. 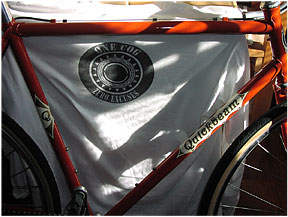 Unfortunately, commitments called - no - demanded - and no ride time
was available until Saturday evening. I got out in the dusk of a
beautiful night and spun over the roadways. First ride in much too
long, courtesy of the cold and flu season raised to the power of too
much work.  But, it was a wonderful outing. Went further on
Sunday, rising with the sun and finding frost on the rooftops in
town.  I don’t think I’ve ridden a more stable and comfortable
bicycle, one which still felt as though it had monstrous amounts of pep
when the engine managed to fire right. 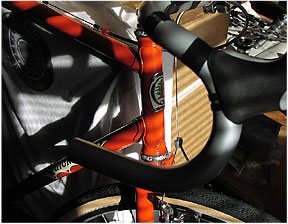 More to come, descriptionally speaking.  But that’s all for
now.  Hopefully this will keep me semi-rational and sane during
the upcoming couple work-crunch weeks.  It’s a thing of beauty. 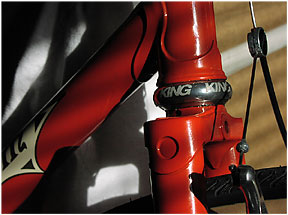