The first CX race came and went last month. In the week before, I toyed briefly with idea of heading over and toeing the line. It would’ve been hard.  I mean, cross races are always hard. But, I hadn’t really done, well, anything to prepare for it.

Riding had been at least been a bit more consistent, if labored. A quick trip to the trails gave me a pretty good wake up call, and made me realize that I really had no business duking it out on the circuit.  It wasn’t really the impending lunch-scorching, bile-tasting chewy goodness of the race effort. Instead it was a definite feeling of lack-of-connectedness to the bike when the topography got bobbly.

Though I’d been riding more regularly, almost all had been on paved roads or pretty smooth bits. While out on the trails that day, I could feel myself tensing up on some more technical passages, not quite able to commit to a move which was necessary.  After playing around with some dismounts and clambering drills, I sat down for a minute and pondered the teachings of two spirtual guides -

“There is no try.  There is only to do or not to do.”  - Yoda“Walk left side of road, walk right side of road. Walk in center of road, sooner or later you get squashed like grape.” - Mr. Miyagi

It was pretty clear that I was trying to walk down the middle of the road. Bad recipe.  Good plan for getting good and hurt.  So, I opted out, slept in, made a nicer breakfast for my wife that weekend.

I was going to write something about it back then, but it began to seem pretty trivial against the backdrop of the financial circus that still swirls around us.  It still does, I suppose.

But tonight - a few weeks later - walking the little dog in the near daylight glow of the full moon, I found myself thinking to the 1920’s and 30’s, when folks did crazy things like show up to watch bike racing on the road or at the track.  How maybe cheering and excitement made things a little easier, gave a little bit of hope. 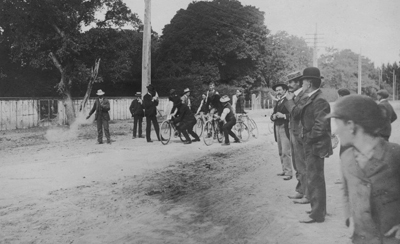 Any line drawn between then and now is tenuous at best.  Times have changed, to be sure, and whether or not I show up at the next race won’t make a damn bit of difference, except for the many folks who roundly school me as they blow past on the way to the finish and get to have another person behind them in the final standings.

On the other hand, there’s some reason we watch, yell encouragement or feel compelled to toe the line. We see the efforts played out at such close quarters. Maybe a goodly bit of artiface crumbles, and we might find similarities.  Maybe we find our better selves for a while.  Maybe we just like to watch men run around in dresses.

The dog continued to sniff and piddle, then patter along slowly towards home. We traded the lead several times as I breathed in the cool and dry evening air. You can feel fall is here now, even though we’ve been having warm days.

I’ve been able to ride a little harder of late, banging around the trails on Saturday with C. Xavier Hilsen and following that up with a trail-n-road fixed ride on the Quickbeam.  The legs felt ok running up some steep bits with a perfectly rideable bike on my shoulder, but then locked up a bit on subsequent tries. Not precisely where I wanted to be right now, but  it is where I is… Got an email from the fine folks at Pilarcitos tonight. They were updating folks on some changes to the McLaren Park race this Sunday.  They say that since the soccer field projects are finished, the course will be rerouted a bit. It sounds like there will be a bit less climbing, though the 30 meter climb they call “The Beast” will remain.

Of course, the “bit less climbing” may be the equivilent of hitting yourself with a claw hammer as opposed to a ball peen hammer.

On the other hand, I’m currently opting for a many-geared system, so how hard could it be? Oh.  Yeah.  I remember now.  It is curious how easily we forget stuff like that. They are adding a “Super Quad” set of barriers to the new “flat” section. And I actually like barriers…