We all develop weird little quirks and rituals.
With respect to cycling, one of mine is the belief that mechanicals
happen in sets of three. I do just enough preventive maintenence that
ride-time is not severely impacted, yet I still have mostly
trouble-free riding. (Ok - that could be enough to jinx it, but because
I’ve admitted that it could be a jinx, that should negate the
jinx-effects).

When I had the uphill flat
recently, the feeling  of  “drat, what’s next?” hovered
alongside like an overly chatty riding buddy.  Couldn’t shake it.
Kept hearing it.

The second hit the next ride - the scorchfest on Tamarancho
- as I wobbled home in a 104 degree headwind, the distinct feeling of a
softening rear tire became unmistakeable. Rather than perish in the
heat, I  stopped a few times to inject air into the tube, which
usually allowed me about a mile or so before demanding another fix.
Made it home, but waited until I could comfortably touch the frame
before messing with the tube replacement. As is tradition with odd and
unknown flats, the tube was sacrificed upon the altar of Park, and a
slice ritually used to protect the Pencam (as a lens cover holder - (not my work, but it was similar…)).

But mechanical #3 still loomed out there… And it found me on Saturday
during a China Camp CX ramble. The saddle on the Poprad has tended to
slide slightly - usually a 1/4″ or so during a hard ride.  It’s
definitely a design flaw, courtesy of the first generation Easton
carbon seatpost.  This post uses a separate clamp on each rail,
put under tension by a sideways entering bolt and a nut with a “tooth”
at the base.  It’s supposed to bite into the post head, so you can
(presumably) torque the bolt with your handy hex wrench, and not have
to hold the nut in place with a wrench. (And, if you are keeping score,
I even have a second one of these which holds a saddle that will not
loosen,
even under extreme wrenching - and yes, I did grease the threads. I
thnk I’ll send ‘em both back to Easton and beg for a 2 fer 1 trade…)

I’d been riding for an hour or so when I felt a little “long” on the
bicycle and decided to check the saddle. It had shifted a good 1/2″ or
so.  Positioning the hex wrench into the already-munged bolt, I
loosened the left.  This one got tweaked a long time ago, and
permits a wrench only in two positions.  But, it worked.  The
other side loosened pretty easily, and I tapped the saddle forward
again. Tightened down the munged side and swapped the wrench to the
other bolt.

There’s a feeling when you just know you’re screwed. You turn the
wrench, feeling a slight increase in tension, followed by an instant
release and easy movement. Damn. A quick look revealed the nut threads
had pretty well evaporated.

I’ll spare you the transcript of removal and retries, dropping and
searching for the bolt in the powdery dirt while other riders
coalesced, ignored me and agreed that full suspension was the only
possible hardware for use
on the trails I’d just come down (I eventually found it), reversing the
nut in the hopes that the backside threads might hold (they didn’t),
searching through the pack for anything that might work (nope), and
finally coming to the conclusion that I was well and truly finished.

But, a rider is finished only insofar as they lack zip-ties. 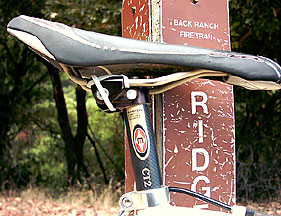 A bit o’ the figure 8 with the longest zip-tie in the pack, and off I
went again - using the saddle for reference only. With judicious usage,
it held through another 45 minutes of trail work, including a momma
turkey and teenager siting, and the road home. 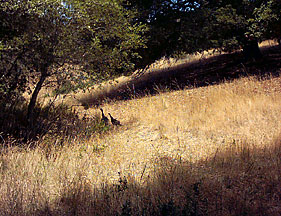 Didn’t even cook the legs too badly, so I was kinda proud.  But, it’s time to get a real seatpost for that bicycle.