First, I wanted to thank everyone who commented here, over on Flickr or directly via email. Your thoughts are much appreciated.

Attended my yoga class last night for some extremely light movement. Though my range of motion was comically limited, my arm and shoulder feel a little better today.  The joints are really tender still, my left shoulder continues to have some issues and my neck is not exceptionally happy, but it seemed to relax the muscle tissue a bit. Which helped me to sleep better.

That yoga is powerful stuff. I’m really glad I started it when I did.  It has given me some useful strength in the upper body, which feels like it must have prevented further damage to my upper body when I hit the road.

Plus, as my wife reminds me, I fall really well.

Which isn’t really a joke attempt.  You see some folks hit the ground like a sack of cement or a big sheet of  plywood.  All that force goes right into them.  You wanna roll.  Stick nothing out and roll.

Not that you have any ability to think about it in any way.  As the saying goes, this thing happened so fast, I didn’t have time to react.  (And, as fodder for another bit of writing, I kind of always thought I would have that time…)  One second I’m heading home on a bit of familiar road and the next there’s a flash of white and serious pain in my right hand.  I could hear myself vocalizing, can recall the feeling of my helmet contacting the ground (though it wasn’t the first point of contact) and a sense of pretty good impact - but in a very general way.  (Based on what hurts the most, my right paw must have been pinned briefly between my brake lever and the truck door, and I hit first on the left side of my arm and shoulder.  Must’ve rolled too, as I ended up lying on my right side in the roadway.)

I don’t recall going out, but the timeline is all screwed up.  I could hear people yelling to dial 911, but it seemed like there were a lot of people around me all of a sudden.  Someone was telling me to stay down.

The first thing I did, and this cracks me up, was run my tongue around my teeth to make sure they were all there. The doc later said it was a reflex action.

So, there I was. The road felt really hot, but I didn’t feel like moving. My neck and back just felt wicked wrenched, and my hand really hurt. Someone appeared with a wet towel and put it on my fingers.  We all hung out in the street until the cops got there, which was danged fast. EMT’s pretty quickly afterwards.

Once they heard “back & neck pain”, they wouldn’t let me move either. Plus, the people who saw said I had gone out.  The best I could do was say I didn’t think I had.  At least I had “4 by 4″ movement.

Here’s the indicator:  It was only about this time when I asked about my bike.

Anyway, the police and emt’s were great. The ambulance ride was really disorienting, because when you are strapped down looking up feeling your weight move right and left, it’s hard to figure out where you are. The lights go over your head in the hospital pretty much like in the movies and shows.  The ER crew were pretty sharp, too.

The coolest thing in the ER were the spotlights.  They hold this Star-Trekky device right were they need the light and then press a button.  Something spins on the top of the handheld unit and these two high-intensity spotlights adjust themselves from the ceiling.

About halfway through the sewing, I thought the doctor was done.  I guess that I didn’t really get a good look at things back in the street. It seems like he did pretty good work - you can check it out if you really want to: 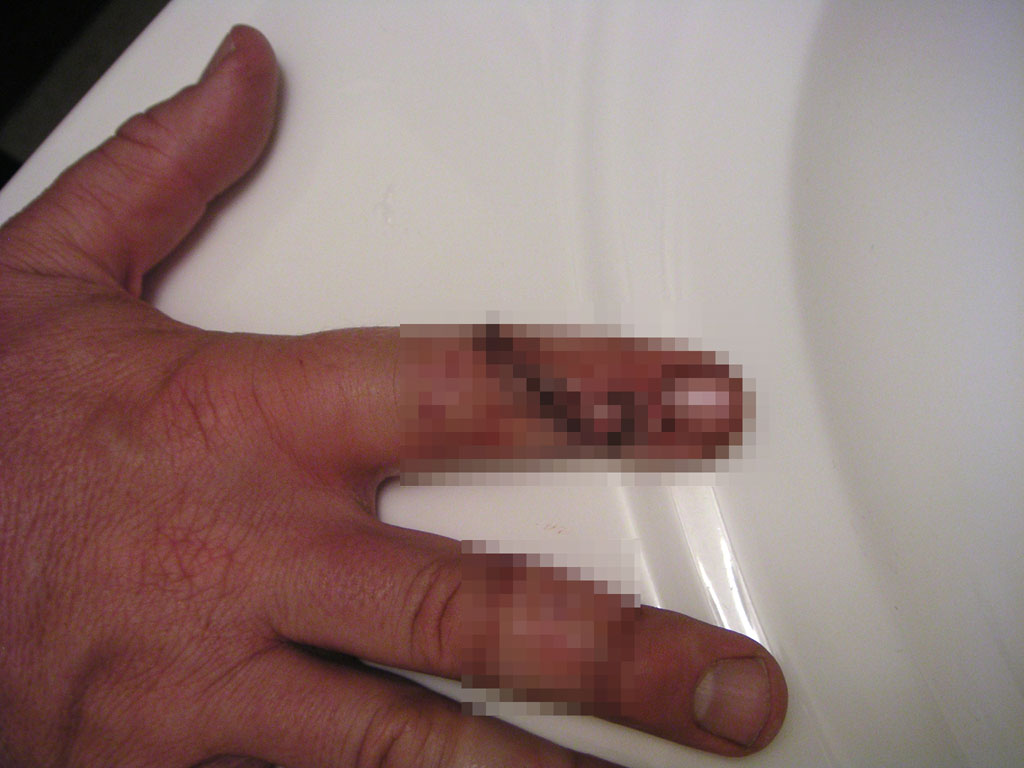 (Yeah, you’ll have to click through to see the real image.)

It’s looking a bit better now, still pretty swollen, but not quite so meaty.  I just have to remember to stop bending the damned thing.  Anyway, this typing is catching up with my hands, so that’s the report for today.