The last couple weeks were a bit hectic and scattered. Through it all, I sensed that fabric was being folded and needles were coursing along seams. Sure enough, the Zugster Rando Bag 002 appeared via the electronic imaging machine.  I kept looking at the photos and wondering how I could shake loose for a Quickbeam loop into the city to pick it up. After pretty much giving up hope of seeing my new bag in anything other than Flickr sets, Adam and I managed to connect late on Sunday at an undisclosed location where the delivery occurred.  After shaking his hand about 23 times, we went our separate ways and I poked and prodded  at the bag, which seemed a wee bit nervous about its future.

Just to assure it that it had nothing to worry about, I bumped around a little later than usual, rigging and setting the bag onto the Nitto Camper “Mini Front Rack” on the Quickbeam. I gotta say, as nice as I’d hoped it would look, Adam’s workmanship just made it sing - The rack setup is not really ideal for it.  It would easily work, mind you, but the rack has an angled loop at the rear which pulls it a bit toward the handlebar and makes it slightly tricky to work the cord release on the top flap (More precisely, it makes it a bit tricky to secure the loop - it’s doable, but there’s just things to work around.)  The bag is maybe an inch shorter than the rack platform as well. I don’t want to make major modifications to this rack, because the Nigel Smythe Lil Loafer is sized perfectly for it. The angled loop is set identically to the Mark’s Rack, which I use on the Hilsen - And, as I ponder these two images, it seems that it would be a reasonable thing to consider  cutting the loop on a Mini-front or Mark’s rack, then reattaching it.  And, since I’m cutting it anyway, it would probably make some sense to create a purpose-designed release system, such as the one Alistair Spence used on his Paramount - 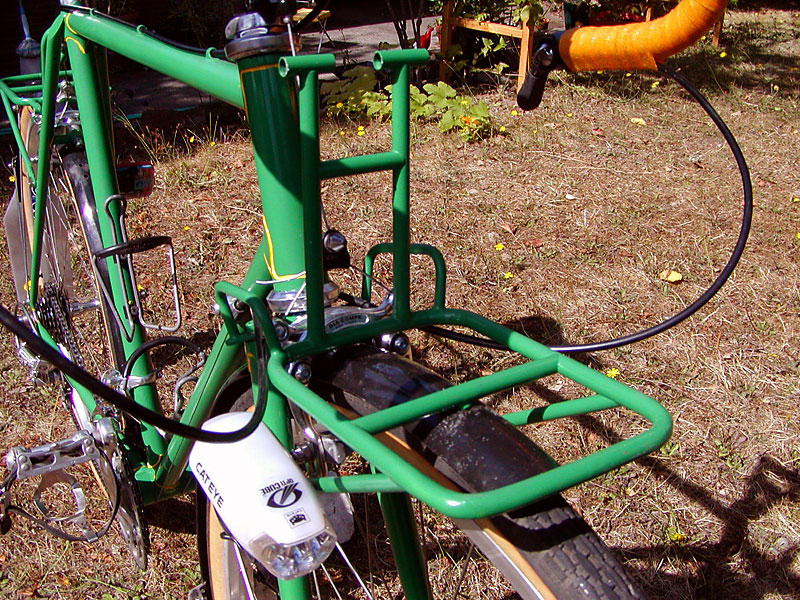 Which seems to be a lot about racks and not much about bags.  Which wasn’t really my point when I started.  One does tend to lead into the other, and I must admit, I hadn’t really thought much about the rack yet.  I was just so psyched when Adam said he had a space in the queue that I just dove in.

Still, there are worse problems to have than pondering those possibilities.

In the meantime, with the regular bits that I bring on my commute - U-Lock, keys, snackies, mini-pump, a vest and some arm and knee warmers, my “be-seen” kit of reflective bits and a spare light and some other odds and ends - it seemed to very happily sit proud and square on the rack on the route to and from work. There’s a light coroplast stiffener which helps in the rigidization.

The bag itself is a custom Medium size - Adam sized the width down slightly from the standard dimensions. It fits just as hoped for, and once I move it slightly forward, things will be even more accessible. In the meantime, I’m enjoying the heck out of this bag -