Seems like there were lots of little strands that I’d planned to weave into blog gold.  Might be able to salvage some,  but now most look like clippings that need to be whisked into the recycling bin.  Why is that exactly? Well, I’ve had a couple of projects in the works that have been taking precedence.  Which brings us to our first topic:

The main project has been the 2009 Cyclofiend Calendar -
(Cue trumpets) 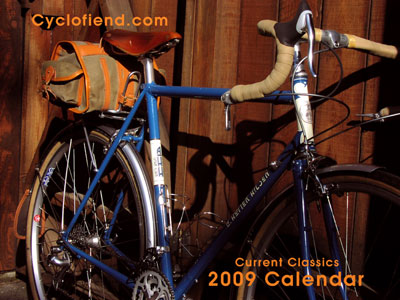 Right now, I’m awaiting the final, final proof from the printer.  As soon as I see that, they will print the first run for me. I’ll be mailing them out to folks as soon as they arrive. I’m extremely excited about it, actually.  It was a bit of a spur of the moment idea, and things seemed to fall in place nicely.  Individual thanks and congratulations to the selected photographers shall be forthcoming.

What I can point out right now is that each month has a photo from a different bicycle in the Current Classic Gallery. It’s an 11 1/2″ x 17″ wall calendar, with a metal hinge.  Full color photos.  Mmmmmmm-mmmm!

I’ve set up a really simple way to order them - buttons below or just go to http://www.cyclofiend.com/calendar and you’ll find the necesssary buttony goodness to order via Paypal (which will let you pay via credit card if you are not a Paypalian).  If you want to send a check or money order, just zap me an email (cyclofiend over-at cyclofiend dot com).

Oh yeah - they cost $16 each, and I’ll send them within the US for $3.00 First Class Mail.  If you order more than 5, I’ll probably need to nick you a few extra bucks to send ‘em via UPS.  But, if you want to step up and reserve yours today, you can either click on the photo above, or this handy-dandy Paypal-ish button here:

Second Project - New T-Shirts
There are also two new pending T-shirts on the way from my surfin’ screenprinter. One is pretty cyclocrossy, and the other one has to do with shifters.  I’ll post some photos as soon as I have them in hand, which hopefully will be this coming week.

Ok, Back to Weaving Straw into Blog Gold…
(That may actually be a registered trademark of Tarik Industries Amalgamated Consolidated Limited, Incorporated, and it concerns me a bit to be using it.  The man wields a large cat. Who knows what else he’s capable of. )

There had been a CX race report in the works, but it probably won’t come to fruition.  Afterall, the next race is this Sunday (and probably my last for this season as I have a scheduling conflict with the Coyote Point race on the 7th of next month.)  I’m firmly of the belief that my focus should remain on the upcoming event.

I’m not actually sure why that would be the case, but it seems like a sports-page-kinda-quote you’d hear in such situations. Anyway.

Last weekend I managed a non-commute, non-short/sharp, non-errand ride.  Took the Quickbeam out in smooth tire mode to get some steady riding in. While heading south, I veered out to include Los Puntas de la San Pedro, which ran right by China Camp. The tug of the trails was strong, so I veered within my veer and rolled over the lower trails. Rolling along and enjoying myself, there was an odd moment of clarity and I realized:

All I Know About Cross Racing I Learned From Riding Fixed Gears Off-RoadThe odd moment of clarity came when I set up for the first rocky little off-camber turn on the trail. Started to ease up and level the cranks when they reminded me in no uncertain terms that fixed-gears don’t allow crank leveling.  Or pedal stopping of any kind. So…
1) Keep Pedaling
In Brisbane, I’m not sure that was happening. The freaking course was maze-like, with 180’s and other fancy little double-back turns.  It seems like there were too many moments of, well, if not actual coasting, then at least less commited pedaling. Which seemed to cause the manifestation of the disembodied voice of Tarik, my cx-sensei, encouraging me to
2) Pedal Harder
For some reason - whether it was time of day (late afternoon race), lack of coffee or whatever, I didn’t really get going at the beginning. Never felt the transition from a too-fast-start to the pace-I didn’t-think-I-could-hold. Just kind of went out there and went, things got dusty and hard to breathe.  And it was bumpy. Really bumpy.  Unlike the ride I was currently enjoying on the Quickbeam with the Jack Brown tires at a moderate, rather than rock hard pressure.
3) Tire Pressure is Important, You Dummy
This one I utterly, completely and totally missed at Sierra Point. We’d been hit by a bit of a heat wave during the week before, and the field had baked to a crackly crunch.  The course also made a once-per-lap curb jump from the start-finish to the off road section.  Even though it was padded with sandbags, I was less confident than I should have been in that transition. Combined with my morbid fear of pinch flats (no, I don’t run sewups), I left the pressure jacked way up and didn’t adjust it before race start.  As Spinal Tap once observered, “The bigger the cushion, the sweeter the pushin’…”
4) Tire Placement and Commitment is More Important Than Perceived Traction
Catching up to a couple of riders, I chanced to hear them chattering about what kind of tread was really best for the topography we were currently enjoying. It made me realize that I had yet to skid or slip, even though my tires had no tread to speak of. While not advocating that style of adhesion for a cross race, it did cause me to realize that too often, I had moved tentatively through the many turns of the course, not committing with eithe body weight or tire placement.  On the last lap or so, I finally shook off whatever demons were roosting in my innards, and found the fortitude to push it into and through some corners, but had to wonder just what took so danged long.
5) Don’t Kill Any KittensAnd not suprisingly, when you ease up pedaling, the bike slows down.  So there’s no reason to use the brakes.

Of course, you can apply back pressure on a fixed gear, so it started to break down about there, as cross dismounts on a singlespeed are just too mind-messing to consider, and I can’t really figure out how cowbells fit into the Big Picture.  Luckily, that was just about the time I hit the fire road descent to the pavement again.

Hopefully, those lessons will stick in my brain on Sunday, at Golden Gate Park.