It’s part of the requirement that when you live in California, you must visit a Whole Foods once at least every 7 days.  This keeps a significant amount of the currency flowing and active in the economy, as opposed to quietly gaining interest.  I follow this requirement by periodically buying a sandwich and an Odwalla from them during my lunch break.

Historically, the local Whole Foods have had a squiggle-tube bike rack right out front, so you lock up in a visible area, where theoretically you can even keep half an eye on your ride as you shop (sandwiches and Odwallas being close to the front of the store).

However this week, things changed. As I rolled to the front of the store, much to my suprise, the bike rack was gone.  After a bit of glancing around, I noticed a laminated sign telling me that the bike racks had been moved to the other parking lot. As there was nothing solid to lock to at the old location, I couldn’t flout the rules, and so eased back through the breezeway to find the newly christened parking oasis - a facility that Whole Foods must have put a lot of thought and concern into planning, being as how they are so oriented to low-impact solutions and such an integral part of the current green revolution. 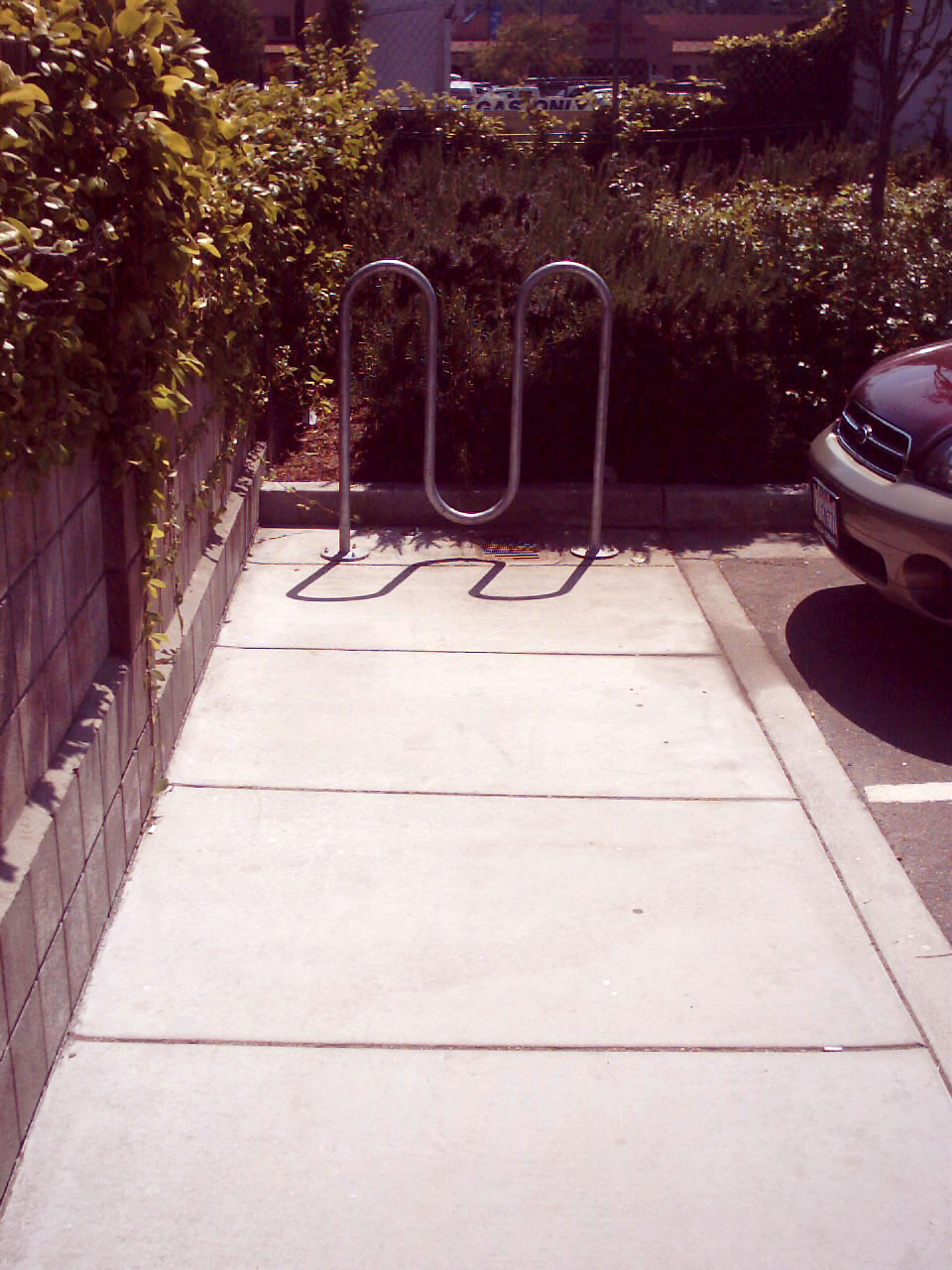 The first thing you might notice is the bike-and-a-half tall wall that separates the west parking lot from the main lot and entrance to the store.  Nothing better than a nice visual curtain to let a bike molester work behind.  It’s also quite well located away from foot traffic moving between the lot and the store.  Presumably, anyone legit or otherwise can have a very private moment or two in this location.   But, wait!  There’s more… Now, I like squiggle-tube racks.  They are hard to compromise, easy to use and look kinda Dr. Suessian.  But, they do have an implied mode of use. Specifically, the bikes are supposed to be inserted perpendicular to the rack. When the rack - this specific rack design - was in its original location, you could fit three bikes in easily, and another two with a little bit of trickery. Everyone I ever saw use them tended to put the bike through it so that the vertical bar of the rack was more or less near the seat tube. This will be difficult to achieve in this location, without ending up with the strong scent of rosemary on your gear. As it was, I ended up with this solution: 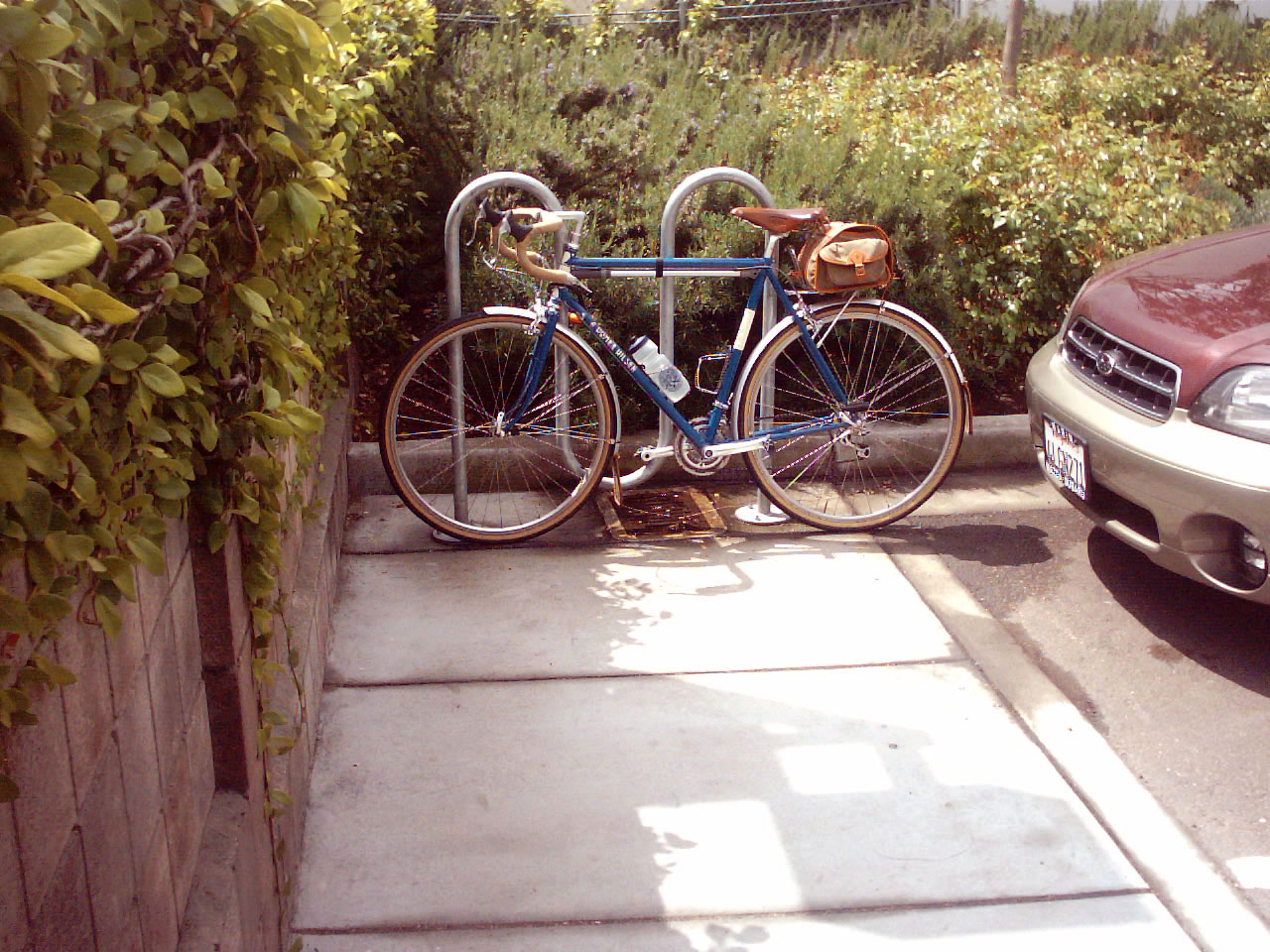 Which no doubt makes it reasonably problematic for the passeneger in the  car that parks there.  And it kinda messes it up for the next cyclist who arrives. In short, it’s really a flippin’ stupid choice by Whole Foods to poorly execute a flawed concept.

Why not take one of the front lot parking spots - how about the one in the corner, with easy visibility to a number of people - you know, the one that always bottlenecks the rest of the traffic when someone tries to exit from it?  - yeah.  That one.  Why not take that one, put a couple of concrete corner bumpers and locate the bike racks there? Y’know, so it would appear that you are trying to encourage non-motorized patronage.

6 Responses to “Meanwhile, Closer to Home”