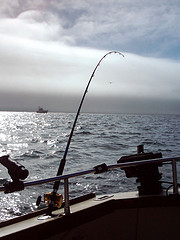 Got to play hookey on Friday and joined my father out salmon fishing. Of all the kids in the family, I’m the only one who doesn’t get seasick, so spending the day lifted and dropped by the swells is OK.  If I time a long/hard ride right, it’s actually a very nice way to recover, and I don’t even get stir-crazy not being able to go anywhere but back to the stern. Besides, it’s a nice way to spend some time with him, and if he’s game enough to let me try to kill him on a mountain bike (a tale for another time), I can handle clearing lines and reeling in a few fish.

As salmon is one of the few bits of meat I still eat, it’s also not a bad reminder of where it comes from. Without diverting too far on that subject, if you are going to end something’s life, it’s not a bad idea to be there when you do so, so you can honor it in any way you see fit.

But, the salmon got off easy. Through whatever combination of recent weather, the full moon, tides and the capricious, primordial impulses that drive the feeding patterns of anadromous fish, our piscatorial pursuit resulted in zip, bupkis, nada, nuthin’, zilch, zero.  My dad had to later stand outside of the market like a 16 year old, begging someone to buy up for him, only this time at the fish counter rather than the beer cooler…

This salmon free result was played out over a few hours - we pushed away from the dock at around 7:15, and bumped back in a bit after 3 pm.  It was a longish day, but enjoyable. We chatted a bit for a while, but after it became clear that no one was doing any better, we dropped into a comfortable silence.  I watched the murres and pelicans, gulls and waves, occasionally tried not to get lulled off to sleep by the pulsing diesel, and thought a bit.

My thoughts nudged themselves over to Zen and the Art of Motorcycle Maintenence. If you haven’t read it, it oughta at least be on the “dang, I gotta do that” list. But, I resisted it through the recommendations of several friends and English teachers over a number years, so don’t take that as an admonishment. When the time is right…

Among the threads in the book is the idea of process-oriented actions versus trying to maintain a static condition.  Of using the imperfections inherent in everything as a tool for keeping oneself, if not necessarily on an even keel, at least within a regular rythmn, kinda like the 2 foot swells every 9 or 10 seconds were doing for us on the boat. This topic manifested itself - suprisingly - in a consideration of bicycles.

The day before, I’d recieved an e-newsletter from a local shop, in which a certain bike from a certain company known for their prowess with aluminum was featured. The model and specifics are unimportant, but the price  stood somewhere north of $6,000. And there it was in the photo, sleek and sexy, newest this and lightest that, curved here and compliant there. It was, by most measures, perfect. Even with my skepticism of things retail, and continually developing penchant for more useful and practical designs on bicycles, I had to say, “mmmmmm - THAT’s a good looking bike!”

In Zen and the Art…, the author describes his friend, who is decidedly not process oriented.  In fact, to avoid the need for tweaking and checking, tightening and tuning, he bought himself a brand new BMW motorcycle, known for its mechanical soundness. To the friend’s dismay, the handlebars cannot be tightened so as to stay level, and vibrate themselves downward slightly with each ride.  The author, in true Bob-ish fashion, snips a shim from a soda can, presents what he feels is an elegant solution.  The friend is horrified, and responds to this as if someone offered a length of rope to hold up the pants on your Armani suit. The author realizes the extent to which his friend simply doesn’t want to know what goes on “under the hood”.

So those different personalities fell on either side of a dividing point, and as more fishless minutes passed, lent themselves very readily to the question of who buys what type of bikes. The buyer of the hot-and-flashy bike I mentioned strikes me as the person seeking that perfection, who might be more likely to take it immediately to the shop if there’s a weird click or inaccurate shift. There are a lot of those types of bikes sold - at least in this area.

The other person doesn’t pursue the perfection of the concept, but finds pleasure in the process of making it work. Though the result may be beautiful, that is of secondary concern.

It’s not that one approach is necessarily better than the other. But I think some of the frustrations you see vented on how particular brands suck or why certain companies have lost their focus stem from a disconnect between the type of personality and the form of the bike.

If I bought that all-singing-all-dancing model of perfected integration, it might frustrate me if I couldn’t fix something that I knew was broken, but was designed for replacement rather than repair. The non-process oriented person who got told to trim a little bit off this bit to make it work right would pretty consider the result a maimed hodgepodge or poor design.

Certainly, most of us don’t land on either extreme.  But, in the past couple weeks there was an incident where an individual’s newish bike failed, in a manner that was vexing and seemed to be due to a manufacturing error. He stated the condition, but didn’t try to draw further conclusions about the company or people, and trusted that they would do the right thing, which they did.  I would posit that he understood the fallible nature of things, though he probably wished sincerely that it had not directly impacted him.

I’ve been on the receiving end of the other personality, whose new gadget failed.  Many times, the problem I had to deal with was making them understand that it was going to get handled appropriately. The sticking point in this always seemed to be their absolute and utter disbelief that this thing could have possibly failed in the first place.  They had to know why this happened, and sometimes it was simpler to supply a theory, just to get them off that point.

All of which may not be here or there. Just sort of an aimless train of thought considered from the perspective of 3 or 4 miles off the continent.  Anyway, time for a ride…