Whew!  Seems like a whole hunk of stuff has been going on for the last couple of weeks and I can’t seem to get my fingers focused enough to type… I’ll try to get a few items out of the “IN” box -

After meeting a bunch of iBob’s at the NAHBS a couple weeks back, I got a chance to meet up again with Chris Beatie (who sent in photos of his 650B Wanta to the Current Classics Gallery) for one of my favorite southern Marin loops - up Conzelman Road to Hawk Hill, followed by the steep descent to Cronkhite Beach.  Much of the summer finds this part of the SF Bay Area hemmed in by fog, but spring (and fall) often mean clear days. This was one of the latter, and we had a good time roaming around the old gun emplacements and enjoying the day. Photos here.

A few days after that, Chris sent along some photos of some other rides, as well as this warning shot - 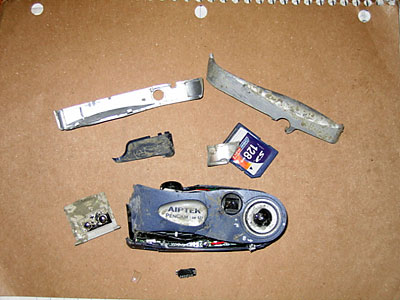 Mental note, never place pencam on bed of truck for self portrait, then
get back to work.
sadly, the memory was bent also…

Now, the reason that I first got the pencam was so that it wouldn’t ruin my day if just this event occurred… Still, it’s a sad sight to see the thing flattened.  Just glad that it wasn’t attached to the rider at the time…

Also in the “Demise of Things” file is the decision announced this past weekend of Rivendell ending its involvement with the RBW list over on bikelist.org. According to the email by john@rivbike.com, the folks over in Walnut Creek have decided to “bow out” of their involvement with the list.  While I find this to be a shame, it’s also understandable. There have been a number of prickly comments recently, some clearly designed just to twist people’s lugs.

Now, the months of February and March are typically the worst on many online communities, particularly when normally active people are staring at another day of snow, or thawing snow and mud, and wondering why the heck they ever bothered to buy a bike in the first place.  Even the best of online friends get a little testy.

But, some of the recent posts which floated down the RBW List flume seemed rotten at the core. Folks hiding behind what appear to be fictitious names, going off on really odd tangents in fractured language, hammering on subjects which had no place on the list.  Then people reacting to those initial posts with civility tumbling like a falling house of cards.

It also seemed as though folks began to look at the list as the means to communicate with Rivendell, rather than a discussion about Rivendell. Confusion in the customer service chain is a bad thing.

I reckon those were the events which became too much load to tote, and the folks at Rivendell decided to pull the pin and let the cars roll back down the hill.

The good news is that most of the people who make the list enjoyable have stated or implied they would like to keep the discussion going.  In a fit of post-ride bliss, I conjured up a Yahoo and Google group, which I can make active if alex wetmore decides to pull the plug on the RBW List.  I can also conjur up a Mailman feed via the cyclofiend site, but it will lack the search and archive flexibility which is maintained over on bikelist.org. It may also end up a section of my anticipated bbs. My honest hope is that alex continues the list, which should hopefully morph into some sort of iROB group.  (And I do find enough difference between the RBW list and the iBob list to subscribe to both.)  Anyway, it’ll work itself out, I suppose…)

Speaking of rides, after a nice little loop on Saturday, JimG and I met up on Sunday to see if we could cheer on Carlos as he finished up the SF Randonneur’s 400km brevet.  We thought we’d be able to head up towards Nicasio and pick them up there, as he was estimating a 24 hour finish time. As all plans with variables tend to go, this one changed appreciably.  First off, Tashi got a bit wobbly as I was setting up to leave, so I ended up trailing her around the house until she steadied up and fell back asleep. After hitting the road, I called JimG, who was also getting a slightly delayed start. When we met up in Mill Valley a bit before 9 am, he said, “You’re not going to believe this, but Carlos and a bunch of rando-riders just went past!”  So, after a quick debate, we headed off after them, arriving to find Carlos, Rob Hawks and bunch of other successfully finished riders hanging out by the Strauss statue. He seemed tired, but in great spirits and fine shape after riding 400km in 21:30!  Huge congrats on a great ride! JimG got some good photos and Carlos already has his ride report and photos posted. We hung out and chatted with other brevet folks for a bit, then a very familiar-looking pair of Rivendells rolled past us in the parking lot - turned out to be none other than Rich Lesnick from Rivendell and Ron Lau, who has sent some beautifully set up bicycle photos into the Galleries. A nice chance meeting!

When Carlos picked up and began his ride (ride!) home, JimG and I headed out on our planned “find Carlos” route, looping up through Marin, climbing White’s Hill and coming back via Nicasio and Lucas Valley.  Despite his statements to the contrary, riding the 300k-from-hell seems to have pushed JimG’s fitness up a noticable notch, as he scooted up the climbs with frightening speed. I plodded along thinking about gear ratios. Not a good idea, exactly, while riding a fixed-gear, but it did pass the time a bit. As we reached the civilization end of Lucas Valley Road, I began hearing an odd “tick-tick-tick”.  We pulled over and found that my rear tire had picked up a nail piercing the sidewall and the tread. Curiously, it still held air, so we skedaddled homeward and got within a couple blocks of our destination before it gave up the ghost. 7 Responses to “Snippets and Such”