One of those weeks which just seemed to take the set out
of my sails, so since no one in SF Rando group agitated for a group
mixed-terrain epic, I was happy to ease out into the morning on my
Quickbeam. It was one of those mornings, though - fogged in and cool,
warning of the end of summer, forcing me to dig out my knee warmers for
the first time in a while. I had caught a whiff of the fall this week -
cold ocean breezes and cooler temps on the commutes.  Sun came
out, but the tick-tick-tick of approaching fall  is now audible.

After returning home, I looked at my really awful footage that got shot by holding the camera on the bars. Painful cinema. Both JimG and Carlos have gotten tricky with velc- umm…. hook & loop fasteners (and their footage looks good - here & here.)
I’d been thinking about some sort of clamp which would let me mount the
camera on the top tube for that “cockpit” view. While avoiding some
work this week, I’d sketched out a couple of thought-fixes.  It
needed some band for the frame tube and some angled connector for the
camera.  The light, both figuratively and literally, suddenly went
on: 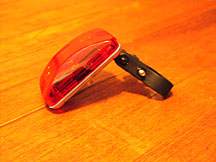 The blinkie!  It has a seatpost mount band! 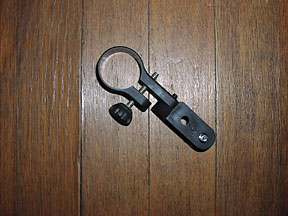 Which it gladly sacrificed for the purposes of this excercise…

I also had a little mini-tripod that had a removeable camera mount screw, so I just used that.  And hot-diggity! 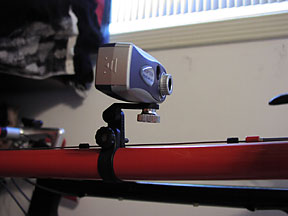 The band slid under the cable on the top tube and I think it’s mounted far enough forward to miss my knees. 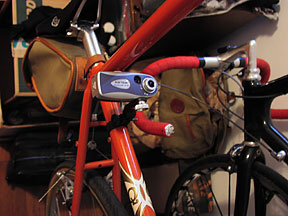 Unlike this position, which I think has limited application - especially if I’m runnng fixed… 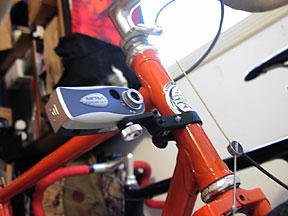 This shows some promise - of course, I was using the QB
for test  purposes - I’m not in a big hurry to wrap something
around the headbadge.  With a rubber spacer, I could easily mount
this onto the stem, although that would possibly bring in the wiggly
potential from turning the bars. (Although JimG didn’t really have much
of that here.)

The problem now to solve is leveling the camera. The plan is to find a
convex and concave surface, using those as done on the pads used with
an Avid canti/v brake (and others).  With a longer 1/4″20 bolt and
a winged nut, I should be able to  run the convex/concave surfaces
against one another, then clamp everything down. I also plan on using a thin hook & loop cable tie as a safety strap.

The first option shown above does not require that, as the camera is
more or less on a horizontal plane.  The mount on the headtube
will require a bit of correction (even just an angled shim would
probably work) or there will be a lot of sky in the footage.